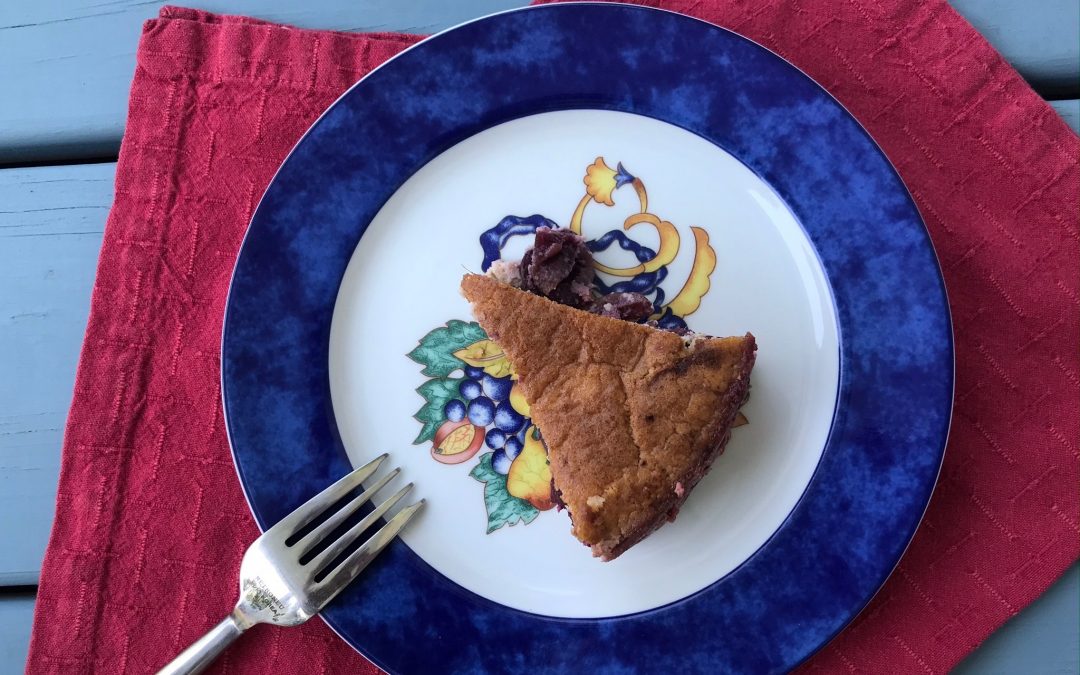 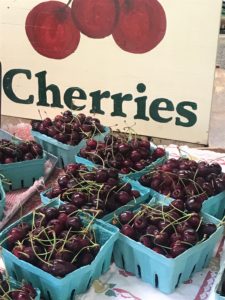 I have a little confession. I LOVE cherries. As a child, I used to eat bowlfuls of cherries in the summer. Unfortunately, much to my chagrin, I am allergic to most stone fruit, including cherries.

One workaround to get around my cherry allergy is to eat them cooked, or baked, in this instance, in a cherry clafoutis. Because I have Hashimoto’s thyroiditis, an autoimmune disease, I also steadfastly avoid wheat, gluten and dairy. My version of cherry clafoutis is dairy-free, gluten-free and requires a minimum amount of natural sweetener (maple syrup).  It is absolutely delicious—and does not give you a blood sugar spike and crash the way that a traditional clafoutis might.

In the summer, I love to serve (and eat!) chilled cherry clafoutis…the texture is reminiscent of a cherry cheesecake! 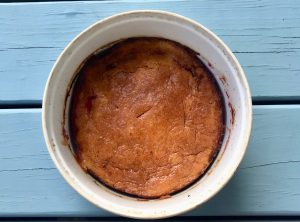 In a medium bowl, combine the pitted cherries and lemon juice. Let marinate 15 minutes or so.

Grease a 10-inch round baking pan or a 1-1/2 to 2-quart souffle dish with butter or olive oil. Arrange the cherries evenly on the bottom of the pan or souffle dish.

To a small stainless steel mixing bowl, add the egg white and cream of tartar. Using an electric hand mixer, beat egg white until stiff peaks form (this is when the peak on the egg white surface holds its shape). Set aside.

In a separate and larger mixing bowl, combine the eggs and maple syrup with an electric mixer at high speed, until well mixed, apx. 2 minutes.

Add the coconut milk, lemon zest, minced ginger, vanilla and Celtic sea salt, beating well. Slowly add the coconut flour, a little at a time to the egg mixture, while beating with the hand mixer.

Using a large silicone spatula, gently fold the whipped egg whites (by hand) into the egg mixture until evenly blended.

Pour the entire mixture over the cherries.

Place clafoutis on center rack and bake 25 minutes. If the top is overly brown in any area, tent aluminum foil over the browned portion. Turn the baking pan or souffle dish in the other direction for even baking. Bake another 25 minutes, or until a knife inserted in the center comes out clean.

When the clafoutis is done, it will be puffed and golden-brown; a knife inserted in the center will come out clean (without any residual batter on it).

Place soufflé dish on a wire rack or trivet. Let cool and allow the clafoutis to set, apx. 30 mins. to 1 hour.

Serve warm, at room temperature, or chilled. It is delicious all three ways!