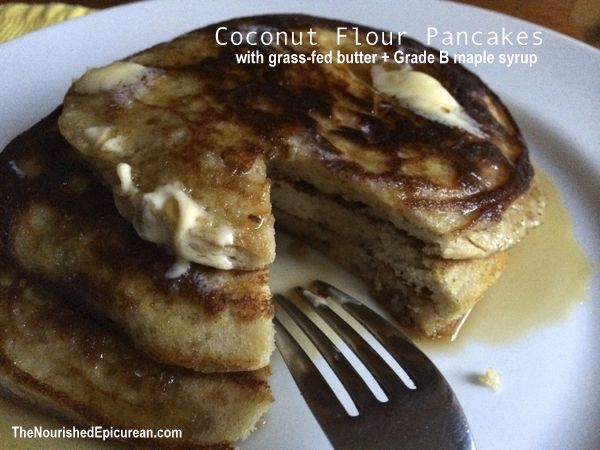 Following a Paleo approach to eating has done what I would have once thought impossible: I lost my near-daily cravings for refined carbs!  My favorite “pleasure foods” about which I used to obsess—and would sometimes compulsively seek out (especially when feeling stressed!)—included: brown rice, noodles, multi-grain bread, muffins, chocolate chip cookies, buttercream-frosted chocolate cupcakes and triple-layer, chocolate-frosted chocolate cake.

Once in a blue moon, however, especially if it’s snowy or frigid outside, and, depending on where I am in my cycle, I might crave something starch-carby. Happily these grain-free coconut flour pancakes hit the spot in the most delicious and satisfying way.

Back when I made scratch pancakes, using whole wheat flour, all-purpose flour, or, sometimes both, I’d work my way through a  full-sized stack of jam-topped pancakes (usually 5 or 6), before I felt full.  Shortly afterwards (usually within 30 minutes), I would be horizontal, barely able to keep my eyes open.  In retrospect, I realize that my fatigue was a symptom of gluten-sensitivity.  Also, gluten-containing foods, like wheat and white flour, have a high glycemic load that raises your blood sugar.  If you’re overeating high-gluten foods, your blood sugar can shoot sky high.  In response, your pancreas pumps out insulin to bring down your blood sugar.  The result?  An insulin spike, followed by a classic “crash” (when your blood sugar comes down).  The aftermath is often experienced as fatigue.  And blood sugar that comes down too far can trigger cravings; or, you may feel hungry an hour or two later.

On the other hand, after eating just two of these gluten-free coconut flour pancakes, slathered in grass-fed butter and drizzled with Grade B maple syrup (tapped from late-season runs, it is darker, more mineral-rich and has a stronger maple flavor than Grade A syrup), I’m able to put down my fork. Made with coconut flour, coconut milk and pastured eggs, these pancakes are packed with protein, which increases satiety and keeps blood sugar steady.  I finish, feeling pleasantly full, yet fueled with energy that sustains me for several hours.  No nap required. 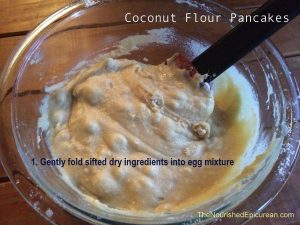 Working with coconut flour can be tricky.  The texture is simultaneously dense and delicate at the same time.  Take the time to carefully measure out the coconut flour, then shake it through a sieve or sifter to remove any lumps.

When it comes to cooking pancakes, it seems only natural to use a non-stick skillet or griddle, doesn’t it?

Far from “natural”, Perfluorooctanoic Acid (PFOA), used in the production of non-stick cookware and bakeware—as well as in greased and water-proofed food packaging (like microwaved popcorn and pizza boxes)—has toxic effects on our health, including thyroid disorders, hyperactivity, reproductive toxicity and an increased risk of later-life obesity for females exposed to PFOAs in utereo.  So does Polytetrafluoroetylene (PTFE), a chemical used in the final cooking surface of non-stick cookware.  Both PFOA and PTFE are part of a group of chemicals called perfluorinated chemicals (PFCs) that have unique properties to make materials stain- and stick-resistant.  Unfortunately, researchers have also found that exposure to PFCs is linked to increased risk of cancer. 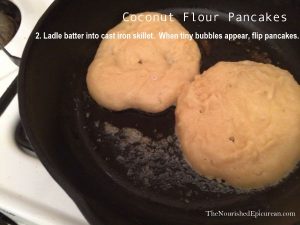 I’ll be covering PFOA and PTFE in more detail in another post.  But this is the reason that I tossed out all of our non-stick cookware and bakeware nearly a decade ago.

What I use instead is a well-seasoned cast iron skillet, an old-fashioned, non-toxic choice—and probably a staple in your great-grandparents’ kitchen.  Heavy, durable and versatile, well-seasoned cast iron cookware actual becomes non-stick over time.  If you’re iron deficient, you’ll also benefit because cast iron leaches a small amount of iron into the food.
A little patience is required in “seasoning” brand-new cast iron cookware.  (Do this even with”pre-seasoned” cast iron cookware).  Coat the inside of the cast-iron pot or pan with vegetable oil (I use olive oil) and heat in a warm oven for at least an hour. Repeat a few more times before you actually using it for cooking.  It is this gradual seasoning process that, over time, makes the cast iron cooking surface “non-stick”. 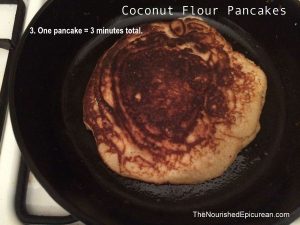 After I use my well-seasoned cast iron skillet, I simply rinse it with warm water (no detergent and no scrubber, which can remove the seasoning) and dry it with a paper towel.  I sprinkle coarse sea salt in the pan, add a little olive oil, and use a clean paper towel to “scrub” off any residual food particles, with the sea salt acting as the abrasive agent.  Avoid soaking cast iron cookware for long periods of time because this can also ruin the seasoning.

Place coconut flour and baking soda through a sieve or sifter.  Sift into a medium bowl.  Add sea salt.  Whisk all three ingredients together well.

In a large bowl, beat eggs, using an electric mixer on medium speed, for about 2 minutes.  Add raw honey and vanilla, blending well, about 1 minute.  Add coconut milk and beat with other ingredients 1-2 minutes, until well combined.

Pour dry ingredients into the egg mixture.  Using a large spatula, carefully fold coconut flour into egg mixture.  Be careful not to overmix.

Warm a little coconut oil in a cast iron skillet over medium-low heat.  Flick a drop of water into the pan; when it sizzles, add 1-2 tablespoons of batter into the pan.  Cook over low heat apx 2 minutes, or until bubbles begin to appear in the batter.  Carefully flip the pancakes using a turner spatula.  Reduce heat to simmer and cook another minute.

Transfer pancakes to a serving dish or plate.

Serve warm, topped with grass-fed butter and a drizzle of maple syrup.

Note: Every stove is different, so keep an eye on the heat. I cook my pancakes using a small cast iron skillet on a gas stove, so, from the start, I keep the flame on medium-low.  I reduce the heat even more (to low) when actually cooking the pancakes. The batter is very delicate; be careful when flipping pancakes and take care not to overcook or scorch them.