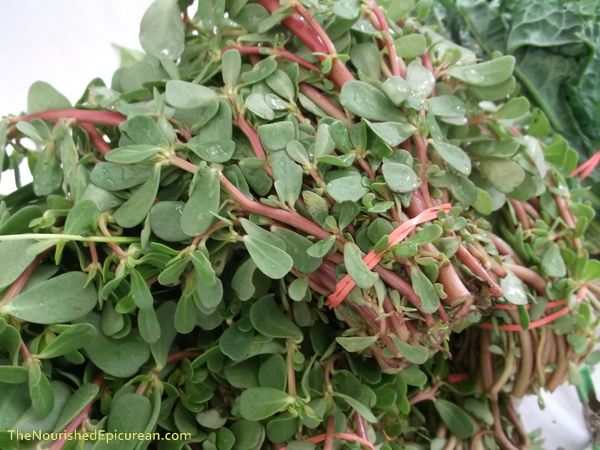 This summer, I started getting high on weed.  I was curious—and wanted to try it.  Now, it’s a weekly habit.  And I’m totally hooked…on lamb’s quarters and purslane!

Had you going there for a second, right?!

Yep.  Lamb’s quarters and purslane are weeds.  I never noticed them on our own property until I saw them generously bundled—and on display—at my favorite farmers’ market stand.

I was instantly drawn to their leafy green beauty.

“Two of the most nutritious plants in the world are weeds—lamb’s quarters and purslane—and some of the healthiest traditional diets make frequent use of wild greens,” writes Michael Pollan in his best-selling book In Defense of Food. 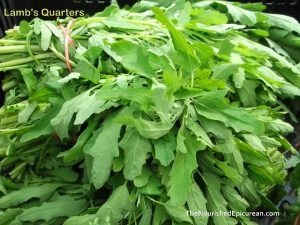 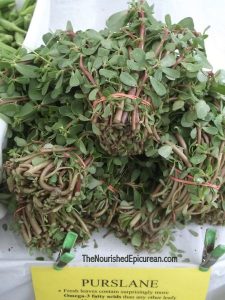 Purslane is an ancient wild food.  Henry David Thoreau mentions having made a “satisfactory dinner off a dish of purslane, which I gathered in my cornfield” in Walden (1854).  Purslane was also an important wild plant food for the Anecestral Puebloans and, most likely, their predecessors as well.

Originally from India, purslane (portulaca oleracea) invaded its way around the world, including North America.  It now grows as a wild weed in all 50 states of the U.S. Botanically, purslane is a succulent with shiny, paddle-shaped leaves and smooth branched stems that are either pinkish or reddish. The leaves, stems and flowers can all be eaten either fresh or cooked.

For much of its North American history, purslane was dismissed as a pesky weed.  That’s too bad.  Because this edible weed is a nutritional powerhouse. A rich source potassium, magnesium and vitamin A, it also supplies vitamin C, B-complex, calcium, and iron.  High in antioxidants, purslane is also an excellent plant source of omega-3 fatty acids (containing more than some generic fish oil capsules at the grocery store). Purslane usually appears in late spring and is generally available until the first frost.

Lamb’s quarters (Chenopodium album) is also known as “goosefoot”, “pigweed” “fat hen” and “wild spinach”.  The British who apparently have little respect for this invasive plant, call it “muckweed”, “dungweed” and “dirty dick”.

How does lamb’s quarters taste?  “Like spinach” is what you’ll commonly hear.  In my opinion, it tastes like a cross between spinach and amaranth, and retains a distinct earthy, wild green flavor and texture.

Nutritionally, lamb’s quarters are a rich source of hard-to-get minerals, including potassium, calcium, phosphorus, iron, sodium and magnesium, as well as vitamins A, C and B, and a good amount of protein. 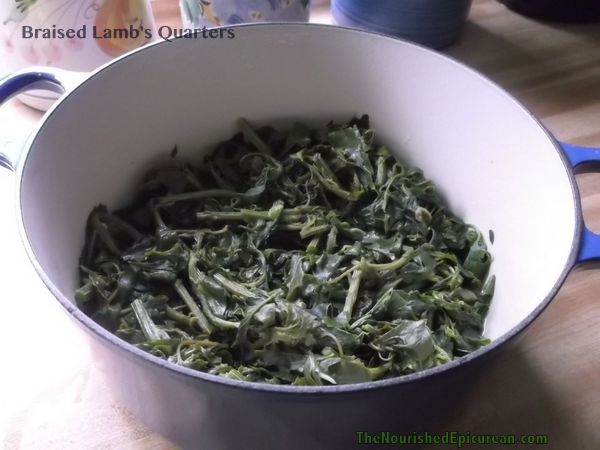 When I first began cooking purslane and lamb’s quarters, I discovered that both greens require a good amount of washing and soaking to remove the dusty film from lamb’s quarters, and the grit from purslane.

During a change of season,  I find a “stew” of purslane or braised lamb’s quarters, with its immune-boosting nutrients, comforting and nourishing fare.

Add purslane and combine with onion mixture until purslane is well coated and begins to soften.  When greens or onion mixture begin to stick to the pan, slowly add bone broth (as needed).  Allow the broth to come to a gentle boil.  Cover Dutch oven and reduce heat to simmer.  Cook about 20 minutes  If the stew is too soupy for your taste, uncover the Dutch oven and simmer purslane at low heat until most of the liquid evaporates.

Add lamb’s quarters, stirring until well coated with coconut oil.  When the greens begin to stick, slowly add bone broth, as needed.  Allow the broth to come to a gentle boil. Lower heat to simmer and cook covered about 20 minutes, or until most the greens are tender and most of the liquid has evaporated.  If the lamb’s quarters are soupy, uncover Dutch oven, and simmer on low heat until most of the liquid evaporates.