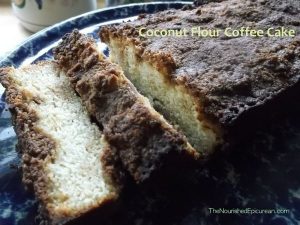 Growing up, one of my favorite childhood treats was my mother’s sour cream coffee cake: the perfect marriage of a rich, moist yellow cake with the irresistible sugary crunch of its walnut-raisin topping.

I inherited my mother’s much-coveted recipe.  And, I confess, it’s the one home-baked treat that I’ve occasionally missed since I began following a Paleo diet (no grains, no wheat, no dairy, no refined sugars, no processed foods) in earnest last year.

The colder it is outside, the more intense my craving for baked goods.  January, in particular—when temperatures are frigid and the snow piles up outside—is when my urge to nest and bake kicks into high gear.

So, I was thrilled to stumble across a coconut flour coffee cake recipe from Carol Lovett, author of Ditch the Wheat.

Coconut flour comes from dried coconut meat that is dried, defatted and then finely ground into a powder.  The texture of coconut flour is fine and delicate; at the same time, it can create a very dense batter—you have to be careful not to overmix when blending with wet ingredients.

The first time I made the coffee cake, I ignored the recipe instruction to bake it in a small loaf pan; instead, I poured the batter into an 8 x 8-inch square glass baking pan.  The result?  A coffee cake that was flat, dry and on the “crispy” side.

I tried again.  This time, I followed the recipe instructions to the letter.  How did it turn out?  Well…  “The flavors are great, but the texture is dry,” said one friend who gave his unvarnished opinion. 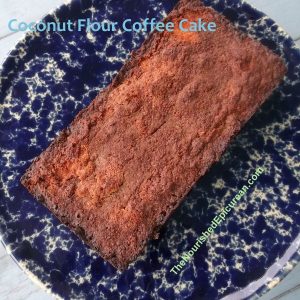 “Your ‘pound cake’ is definitely moister this time,” my friend enthused, then asked: “But isn’t anything sugary bad for you?”

For me, this coffee cake qualifies as a guilt-free indulgence. The batter is sweetened minimally with raw honey; the cinnamon topping includes coconut palm sugar, a natural whole sweetener with a low glycemic index (GI 35).  And, gluten-free coconut flour is rich source of dietary fiber, protein and lauric acid—a “good” saturated fat—that can help promote thyroid health and the immune system. Combined with four pasture-raised eggs, this “cake” is a tasty, protein-rich special occasion indulgence.

Preheat oven to 350 degrees.  Grease the bottom and sides of a 9″ x 5″ stainless steel rectangular loaf pan with grass-fed butter, like Kerrygold.

In a large bowl, combine the egg whites and cream of tartar, using a hand-mixer.  Whip until stiff peaks form (this will only happen if you are careful not to get any yolk in the whites).

In a medium bowl, cream together honey and 1/4 cup melted coconut oil.  Mix in the 4 egg yolks.  When combined, blend in the vanilla.

In a small bowl, whisk together the sifted coconut flour, baking soda and Celtic sea salt.  Using a large spatula, gently fold the dry ingredients into the honey, coconut oil and egg yolk mixture until just combined. Be careful not to overmix—or batter will become very stiff and tough.

Add the batter to the egg white mixture.  Using  a large spatula, gently fold egg white into the batter until just combined.  Spread batter evenly in the greased loaf pan.

In a small bowl, whisk together the coconut sugar, coconut flour and cinnamon.  Sprinkle over the batter so that it is even distributed.  (I use about 2 tablespoons).  Drizzle 1/4 cup melted coconut oil over the topping.

Bake for 30 minutes.  The cake is done when a knife (or toothpick) is inserted and comes out clean.

Set loaf pan on a wire rack.  Allow to cool before slicing and serving. 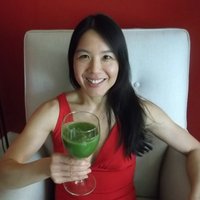 Hello…I’m Kathryn Matthews. As a Functional Health Coach, I help clients improve their health through their food choices and lifestyle practices. By living cleaner, greener and leaner, you invite energy, vitality and optimal health into your life. Read More

Posts on The Nourished Epicurean may contain affiliate links, which means that Kathryn may receive a percentage of any product or service you purchase, using the links in her articles. You will pay the same price for all products and services, and your purchase helps support this website. Thank you for your support.

Disclaimer: The information provided on this site is for informational purposes only and is not intended as a substitute for advice from your physician or other health care professional or any information contained on or in any product label or packaging.
© 2020 · The Nourished Epicurean