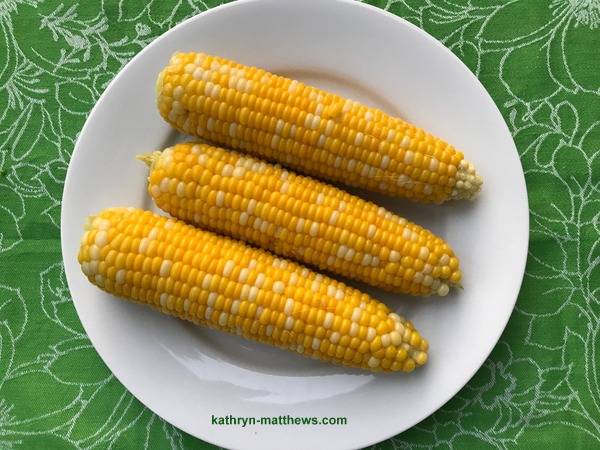 Eating fresh, locally grown corn-on-the-cob with a sprinkle of fresh-chopped herbs (tarragon, basil, cilantro, mint) and a generous drizzle of olive oil is a toothsome summer treat. I only eat corn-on-the-cob when it is in season. And, in New York’s Hudson Valley, corn is at its eating best in August and early September.

Fresh corn-on-the-cob is a good source of minerals, especially potassium, as well as magnesium and phosphorus. Corn-on-the-cob also contains folate and a fair amount of protein (for example, one large ear contains apx. 5 grams of protein). Although corn-on-the-cob is a starchy vegetable, its relatively high fiber content makes it a complex carbohydrate that the body digests more slowly, which helps keep blood sugar stable.

A corn note: Most of the field corn grown in the U.S.—apx. 90%—is genetically modified and used for animal feed and ethanol; it also winds up in processed foods by way of corn-based sweeteners (e.g., high fructose corn syrup, corn syrup, etc.), starches and oils. On the other hand, only a small percentage of sweet corn grown in the U.S.—for human consumption—is genetically modified.1 At least…for now.

Like fish, corn is a food that is so simple to cook…yet—more often than not—it ends up overcooked! If you’ve ever eaten at an old school-style New England seafood restaurant, where the lobster arrives with mushy, over-boiled corn, you’ll know exactly what I mean!

Years ago, my husband and I stumbled across the late Craig Claiborne’s boiled corn recipe in the New York Times Cookbook. Though it didn’t seem possible that a seemingly simple, straightforward recipe could produce such a good outcome, we were happily proven otherwise. If you follow it to the letter, this classic recipe guarantees that you’ll have perfectly cooked corn-on-the-cob every time!

Fill a Dutch oven or a large heavy-bottomed pot two-thirds full of fresh cold water. Cover, and bring water to a roiling boil. Do not salt the water.

Once the water is boiling, slip in the ears. Cook, uncovered. When the water comes back up to a gentle boil, remove pot from the heat, and cover. Set timer for 5 minutes. Steep corn for 5 minutes—and not 1 second more!!

Remove corn from the water immediately and cool on a large plate or serving dish.

This free guide is your next step to reducing chronic stress and transforming your health.

Your information will *never* be shared or sold to a 3rd party.