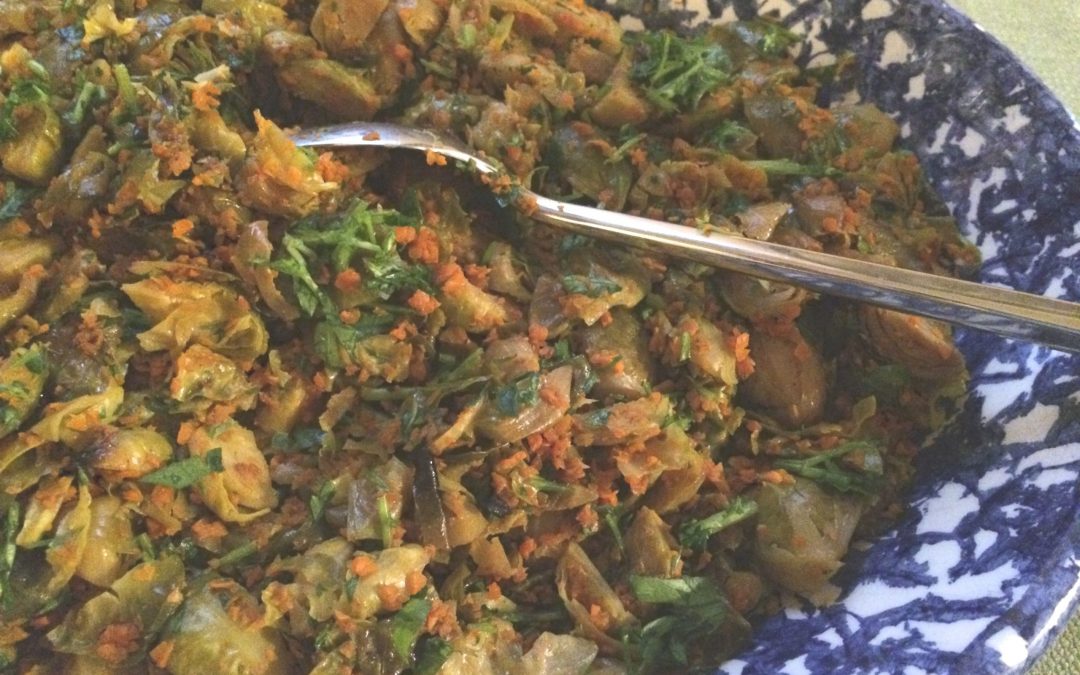 Bigger is not better—at least not when it comes to Brussels sprouts. At farmers’ markets, I purposefully seek out the smaller-sized ones, which are more tender when cooked. The bigger ones tend to be older, tougher—and stinkier.

Although I’m not a fan of the common cabbage, I happen to love Brussels sprouts, which, incidentally, rank #1 among America’s “most hated vegetables” according to a 2008 research study conducted by Heinz. They’re gaining an appreciative eater-ship though: earlier this year, Forbes magazine included Brussels sprouts in their “Top 10 Food Trends for 2014”.

I have a bitter bud, so I appreciate Brussels sprouts’ earthy, slightly bitter flavor, which our bodies tend to crave during cold weather months. There’s no denying, however, that Brussels sprouts, a member of the Brassica family, can stink of sulfur—and they will, especially, if you overcook them via steaming or boiling. But that pungent odor is a good thing: it comes from a type of glucosinate, a sulfur-containing compound that helps fight cancer.

Brussels sprouts are the perfect late fall to winter vegetable—hearty, yet low in calories, flavorful, and versatile. They’re also an immune-boosting food, containing double the amount of Vitamin C than found in an orange. A good source of fiber, vitamin K1, manganese, potassium, choline and B vitamins, Brussels sprouts also contain D3T, a rare sulfur-containing compound, that helps your body ward off chronic oxidative stress, linked to cancer and other chronic diseases.

High in fiber, Brussels sprouts help move things along in the digestive tract and may help reduce risk of colon cancer. If you’re not a fan of Brussels sprouts (or if you find their cruciferous odor offensive), then don’t boil or steam them, two cooking methods that can exacerbate the sulfur “aroma”.

My favorite way of cooking Brussels sprouts is to roast them. This way, they caramelize, which tames the bitterness—and their strong smell. The following recipe, which combines Brussels sprouts with two other naturally sweet vegetables—carrots and onions—is a classic at my Thanksgiving table every year. The nutritional yeast (rich in B vitamins) adds a subtle “cheese” flavor to the dish.

Place pans on top rack of the oven and roast for 20 minutes, or until Brussels sprouts brown slightly.

Remove pans from the oven, add 1/4 to 1/3 cup water to each pan and deglaze. Return to oven and cook another 5-8 minutes.

Remove pan from oven. If the Brussels sprouts are sticking to the pan, add a little water to deglaze. Toss with chopped parsley and remaining 1/2 teaspoon of Celtic sea salt, adding more to taste, if desired.

Serve warm, or at room temperature.