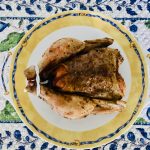 A delicious twist on classic roast chicken? The addition of cinnamon! Beyond imparting a warm, sweet, fragrant aroma, cinnamon is a spice that has also been used medicinally since ancient times. The Chinese used cinnamon at least 5,000 years ago, and medicinal the use of cinnamon in Egypt, India and parts of Europe harks back […]