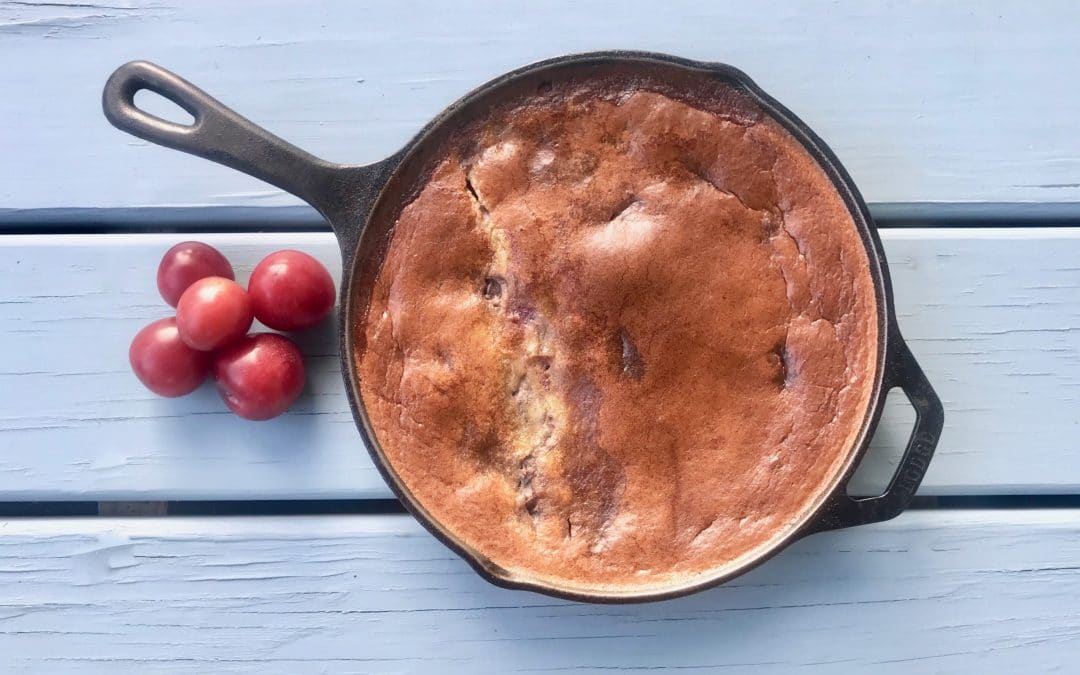 I was first introduced to clafoutis at a dinner party hosted by a British friend.  I instantly fell in love with this warm, eggy dessert, with a generous scattering of pitted cherries, and its custardy cake texture. After coaxing the recipe from my friend the next morning, clafoutis became one of my signature dinner party desserts—and it was always a crowd pleaser.

Clafoutis is a rustic French country dessert that traditionally combines eggs, milk or cream, flour, a generous measure of sugar, and whatever fruit is in season, whether cherries, pears or plums. Its simplicity and versatility is what makes clafoutis so appealing.

After being diagnosed with Hashimoto’s thyroiditis, an autoimmune thyroid disease, I gave clafoutis a dairy-free, gluten-free and low sugar (natural sweetener only) makeover. For this plum clafoutis, I use full-fat coconut milk instead of milk, 2 tablespoons of raw honey instead of sugar and a smidge of buckwheat flour instead of all-purpose flour. By the way, despite its name, buckwheat does not contain wheat and is 100% gluten-free. Orange and fresh ginger add nuanced depth to the plum flavor.

If you are able, choose locally grown, organic plums as plums have a thin skin and can contain high pesticide residue (and, no, the pesticides cannot be “washed out”).

The result? Even more delicious than the original version! 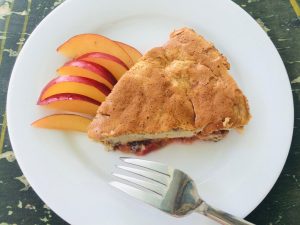 In a small stainless steel bowl, use a hand mixer at high speed to combine the egg white and cream of tartar; continue beating apx. 3-4 minutes, or until stiff peaks form (this is when the peak on the egg white surface holds its shape). Set aside.

To a separate, large mixing bowl, combine the eggs and raw honey with an electric mixer at high speed, until well mixed, apx. 2 minutes.

Add the coconut milk, orange flavor, ginger and Celtic sea salt, beating well. Slowly add the buckwheat flour, a little at a time to the egg mixture, while beating with the hand mixer on low speed.

Pour the entire mixture into the skillet over the plums.

Place clafoutis on center rack and bake 25 minutes. If the top is overly brown in any area, tent aluminum foil over the browned portion (this may even be the entire clafoutis). Turn the cast iron skillet or souffle dish in the other direction for even baking. Bake another 25 minutes, or until a knife inserted in the center comes out clean.

When the clafoutis is done, it will be puffed and golden, and a knife inserted in the center will come out clean (without any residual batter on it).

Serve at room temperature or chilled (especially in the summer).